As we approach the end of the year, I always take the time to think about my intentions for the year ahead and whether I stuck to, or achieved, what I had set out to for the current year.

It’s also the end of a decade and this is a good opportunity for all of us to reflect on the last ten years.

I must admit, I struggle to remember what I did yesterday, let alone ten years ago. But that’s the beauty about blogging as I have documented many of the ups and downs of the last decade as it happened.

I didn’t start this blog until 2013, though. Before that, it was Nikki Young Writes and before that, The Diary of a Full Time Mum. Neither of these blogs exists anymore (probably not a bad thing), but by looking through my blogs, as well as my files, I’ve been able to piece together the fragmented memories of the early parts of this decade and it’s really where my writing journey began…

We ended 2009 with a party, to celebrate our youngest child’s first birthday and to say goodbye to the house we were living in, and in April 2010, we moved into our current house – our forever home.

I was already copywriting by this point, working from home, but the decade began with some self-development in the form of a Writing for Children course and a Freelance Writing and Journalism course. I set up my copywriting website with the intention of taking on more freelance contracts and during the first few years of the decade, I was writing for businesses, as well as blogging prolifically and being paid to write articles for online publications.

When my youngest started school in September 2013, this gave me a little more freedom and I was combining freelance work with novel writing.

I added a second blog to my repertoire in 2015. ‘A Free From Life’ focused on all the health issues we’d been dealing with in our family and it felt right to give this its own space (I wanted my personal blog to keep more of a focus on my writing work.) I still run this blog. It’s had its ups and downs though – being a finalist in the Allergy Blog Awards and also being hacked to the point I almost lost the entire thing. 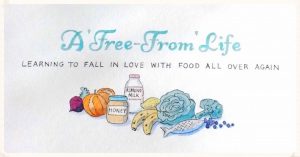 There have been some big moments in this decade. Turning forty was one of them and I will admit, I went into my forties kicking and screaming. Four years in, I can honestly say I am loving it. For reasons I can’t explain, I feel calmer, more self-assured and happier now than I have ever been.

I became a mum for the fourth time when I turned forty, too. No, it wasn’t a mid-life crisis. We did what most families with three children tend to do – we got a dog! No regrets there. He’s definitely a big part of the family and one of the best decisions we ever made.

Turning forty was the big kick up the bum I needed to finally do something about my dreams of being a published author.

I’m sure you’ll remember, 2016 was a dreadful year for the world too and it really made me sit up and have a good long think about getting on with what I wanted for my own life.

Along came The Mystery of the Disappearing Underpants in May 2017. This adventure story for 8-10-year-olds takes inspiration from the street where I grew up and a childhood spent running around outdoors getting into mischief. For me, it was the perfect choice to kick start my publishing career and I have not looked back since. 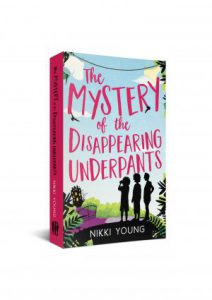 Publishing my book gave me the impetus to start my own business.

In July 2017, I began to run creative writing workshops from my garden studio and the Storymakers Creative Writing Club was born. With three groups covering different ages running regularly each week, along with holiday workshops and private tuition, the Storymakers Club has gone from strength to strength and will be celebrating its third year next July. 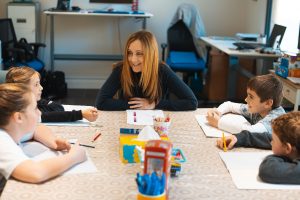 Time School: We Will Remember Them, followed The Mystery of the Disappearing Underpants in June 2018, making for a very busy year. By the end of it, I was exhausted and I made a promise to myself to take stock in 2019. My intentions were to stop spreading myself too thinly, to exercise some self-care, practice gratitude and to know my strengths. I spent much of 2019 doing just that, looking at how far I’d come and working out where I wanted to go to next.

It was during this period of reflection that I found a publisher for the Time School series. I needed to decide whether I wanted to keep publishing on my own or get the support of a publisher. I felt the latter to be the best thing for me, so I could keep my focus well and truly on the writing side of things, as well as on growing my business. I was lucky enough to find Hashtag Press, who have agreed to take on the series as a whole. 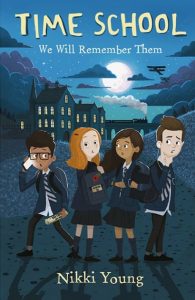 This meant re-publishing book 1, which is due out on World Book Day, 2020.

At the beginning of the decade, I had three children under six. Ten years later, I am 44 years old. My eldest will be sitting her GCSEs next summer, looking towards Sixth Form, whilst my youngest is preparing to make his next move to secondary school. Things are very different around here now and I think half-way through this decade marked the turning point.

By July next year, I will be the author of three books. I will have been running Storymakers for three years, having established three regular groups: The Story Writers (7-8-year-olds), Writer Buds (9-10-year-olds) and the Young Writers (11 years+). It will be the year of threes! And that, surely, is something worth celebrating, right?

“There is genuine suspense. Will they be able to

In line with my new branding colours, I have a sel

Blogging for your business is one of the best thin

I’ve been working on some images with brand colo

“You’re not coming back are you?” Martha sai

I think the characters from Time School would look

“Jess tried to twist to see, but couldn’t move

“Jess looked at her new friend breaking with the

“Martha led them down a dusty, cobbled road towa

One of my websites is broken and has been for the

It’s a big year for the Time School series. Whil

Do you ever feel like you don’t really get going

“This is awful. I never thought for one second w

How was your storm? This was ours - leaking window

“Martha sat on the floor with her knees bent up

What a great idea @bricklayerschipstead. There are

“Jess felt the hairs rise on the back of her nec

“She looked at her radio alarm clock. Once again

Load More…
This error message is only visible to WordPress admins