Sorghum is an ancient cereal grain that was first cultivated around 8,000 years ago in Southern Egypt. Grown widely in the USA, Africa and parts of Asia, Sorghum’s natural ability to tolerate drought makes it the fifth most important cereal crop in the world.

In the USA, the main use of Sorghum is for animal feed and fuel. In the developing world, however, this grain is an important source of food. Known as Milo or Guinea Corn in West Africa, Kafir Corn in South Africa, Dura in Sudan, Mtama in East Africa, Juwar in India and Kaoliang in China, flour made from Sorghum grain is a common ingredient of flatbreads, tortillas, cous cous, porridge, a rice-like meal and even beer.

Sorghum does not have an outer hull like other grains, therefore, when processed it is eaten as a whole grain, which retains its nutrients. It also has a low glycaemic index, which means that the body digests it slowly. This helps to maintain blood sugar levels and keep you fuller for longer.

The neutral taste and light colour of Sorghum flour make it a good substitute for wheat. Being naturally gluten free has meant that this flour is now becoming more popular in the western world as a source of food for those who avoid gluten. With 10 grams of protein per 100 grams of flour, Sorghum flour is a medium to high protein flour, making it suitable for use in a variety of baked goods.
For best results, always use a mix of gluten free flours and starches. 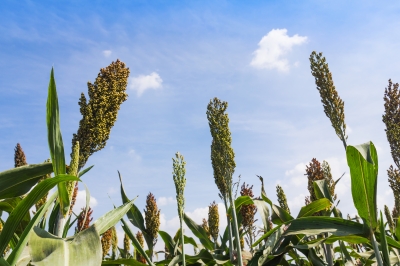 Photo by Stoonn, courtesy of FreeDigitalPhotos.net