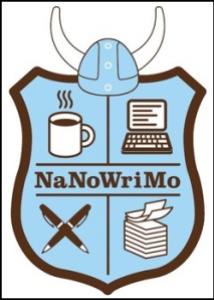 National Novel Writing Month or Nanowrimo as it is commonly referred to, is fast approaching. From November 1st thousands of writers will attempt to write a minimum of 50,000 words before midnight on the 31st.

Some writers hate the idea and believe you cannot possibly write a novel in a month. Others love it and swear by it as a useful tool. You have to be realistic. At the end of the month, it’s possible you will come out with 50,000 words of pure rubbish. But you have 50,000 words down on ‘paper’ and that’s surely a great basis from which to work from in order to produce something great isn’t it?

Have you done Nanowrimo before? If so how did you get on? I have some ideas I would like to work on and I am undecided as yet whether I should use Nanowrimo as a reason to knuckle down and get on with it.

One idea is already in the planning and I even started it (is that even allowed?), so I know the characters and the basic plot. Another of my ideas only came about the other day thanks to Chrissie at The Muddled Manuscript. It is a prequel to the novel I have already been working on and I am not sure where the story would go, but it does include some familiar characters. I need to make the decision which one to go with though.

If I go ahead with this, I am possibly setting myself up for failure. It means early mornings to write around 2,000 words and I’m not sure if I can achieve anything more than five days a week. But when I think about it, failure doesn’t matter, because at least I will have made a really good start at my next novel by the end of November and that is basically my main aim.

I found some great advice on Kristen Lamb’s blog. One of the main points she makes repeatedly, is that NanoWrimo is for writing, not editing. If you are going to do it, get on and write and don’t even worry about typos. Definitely don’t come out expecting to have a novel ready for publishing.

What do you think? Can it be done?