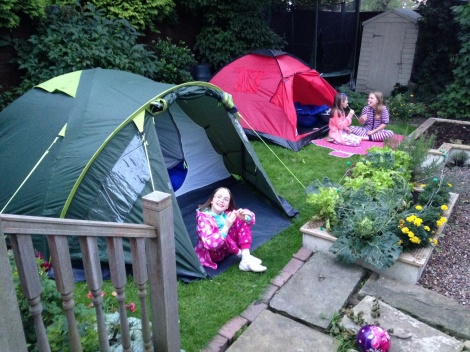 My eldest daughter has been begging to go camping (and you know how kids can beg). We do not own a tent or any camping equipment and camping has never been on our list of holiday ‘to do’s’ despite its ever increasing popularity.

‘Everybody else goes camping,’ says my daughter, who feels she is badly done to in life in general.

A compromise during the summer holidays was a sleepover camp-out at my friend’s house. You cannot beat a sleepover in a tent, especially if you get to sleep in doors whilst the kids sleep outside. Unfortunately, (for me) my five and seven year old wanted to do it as well, so I had no choice but to sleep out with them.

We had two, four-man tents, which meant that we were able to split up and the probability of getting some sleep was slightly higher. We had air beds, had doubled up on the sleeping bags and so we were all set.

All was good in the world. On a chilly English summer’s evening, we dutifully gathered around the Chiminea, not only to toast marshmallows, but also to keep warm. Bedtime arrived and the children settled down to sleep.

I joined them a little later. Dressed ‘lightly’ in my winter pyjamas, fleece and hoodie, I snuggled in to my sleeping bag, pulling up my second sleeping bag for good measure and willed my body to warm up. I closed my eyes and hoped that sleep would come, but the wind and the rain came first. As it lashed against our tent, I prayed that we had put the hooks far enough in to the ground. It had been such a mild afternoon and we had not factored in torrential rain and wind (I do not think it was actually that bad, but it sounded like that from where I was lying).

I think I had around an hour’s sleep that night. The reason I know this is that there was a church clock somewhere in the distance chiming on the hour every hour. I heard all but one of the sets of chimes.

The point of this exercise was to give my daughter the taste of camping that she had so craved. How did she get on? Well, she admitted that she was cold all night and thought she had managed to sleep around four hours in total. The following night, she had a sore throat and temperature and ended up in bed at around 6.30pm feeling thoroughly miserable, because not only was she ill, she had been so looking forward to it and it had not turned out as she had thought.

‘I’m sure camping can be fun,’ I told her. ‘But you can’t always predict the weather and when it is cold and wet, being in a tent is not always the best place to spend your time.’

At least now, the pressure to go camping will be off; my daughter told me that her ideal holiday would be a warm, sunny place near the beach.

I can live with that.

Sorry if that sounds miserable, but ever since being pregnant for the first time, I have had trouble with my back. Three pregnancies later, along with lots of lifting of children and bad posture in general, it finally gave out. That was two years ago and I have been managing it with chiropractic and sports massage ever since.

My orthopaedic bed is the only one I am ever able to sleep properly on, so going away is always a problem. Last week we were staying at my mum’s house near Leeds and so it was already beginning to hurt by the time the sleepover arrived. Sleeping on an airbed for the night, along with a four-hour drive home two days later just about finished me off.

So perhaps now you can begin to understand why camping is never going to be for me.

However, it is fine. One sports massage later, plus a couple of nights back in my own bed and I am back on the mend again.

My other daughter and son had the best night’s sleep ever in the tent (their words) and loved it, so not all was lost. Did we have fun? Yes. Will we do it again? Probably (give me a year). It seems that in the end, we created some memories that night and to me, that is what childhood summers are all about.