The crazy boy has been up to his funny antics again.

We were in Rome last week and he was fascinated by the Coliseum. The funny thing about this place is that around the outside you find numerous ‘Roman Soldiers’ eager to have their photos taken with the tourists and then charge them 5 euros for the pleasure.

The rest of us giggled at how tacky this was and remarked that they probably weren’t even from Rome itself, but not the boy. In his five year old mind he was in awe of them (and also impressed because he loves a bit of dressing up). Every day he asked:

‘Can I have my picture taken with one of them Gladiator people?’
‘Really?’ we asked, but he was adamant. So we promised we would stop by there on our last day.

On that morning my son got ready and came out of his room carrying his light saber.

‘What is that for?’ I asked.
‘For having my picture taken with the Gladiator,’ he replied.
‘OK then.’ (what do you say to that anyway?)

Only he would think about challenging a Roman soldier to a duel with a light saber.

On that afternoon there was a lot of rushing around at the Coliseum. A huge, dark grey cloud was looming and threatening to burst any minute, so there was a flurry of activity as the street sellers ran around trying to flog plastic capes and umbrellas.

We found our Roman soldier sitting on a wall and looking a bit bored. But he smiled brightly and resumed his usual professional self when we turned up. And here are the resulting photos: 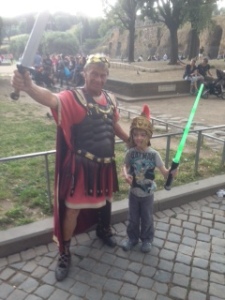 I’m sure he doesn’t get requests like that everyday. It would have certainly given him something interesting to tell his family that evening, I’m sure.