I have had the strangest week and it has completely knocked me off balance. You see, it was the first week of the school holidays and I had it all worked out. Eldest daughter at drama school for the week, other two doing a sports camp on one day and golf for three of the other mornings. Then I was going to get on with some work. I’ve got a manuscript to edit, a story to finish, some articles to write and loads of copy writing, blah, blah, blah . . .

But what I didn’t factor in was my middle daughter breaking her arm on the eve of the last day of school and then spending the next three days at the hospital with her. It is surreal to go from the elation of the last day of term, to dropping an excited child at a sleepover party, to getting a call a few hours later that there had been an accident and we needed to come and pick her up, to waiting four hours the next day whilst she underwent surgery.

What happened at this party, it transpired, was that an older child (a ten year old) tried to pick up my daughter by putting her legs over her shoulders. My daughter is six and too heavy for a ten year old, so it is not surprising that she dropped her. But from the height of this older girls’ shoulders, the drop was enough to cause an injury from the impact of the fall. My daughter broke her arm just above the elbow and the bone was displaced through the artery and main nerve that runs through her arm. She had to be operated on to wire the bone back together and a vascular surgeon was called in because at one point there was no pulse running down her arm.

It was all very scary, considering she only broke her arm, but I guess there are varying degrees of everything and as far as injuries goes, this was a pretty serious one. At the moment we don’t know the lasting damage caused to the nerve. We have movement in the fingers, but she has constant pins and needles and she can’t fully feel the tips.

So, all plans for the school holidays are completely over turned and I have spent the week hovering over my daughter, scared to death that she will fall over or bang her arm and end up in surgery again. Neither she nor I have really known what to do with ourselves this week, so we have either watched films at home or sat in coffee shops playing cards or dominos.

It could be considered an opportunity to spend quality time together, but I also have a four year old son, who has understood zero of the seriousness of what has happened and all he sees is that we are stuck at home and his sister has been getting all the attention. Cue one whinging, moaning, tantruming little boy, who has been hell to put up with. But I can’t exactly punish him for it, as I realise that it is just his way of reacting to what is going on around him.

I, for one, have found that I have been emotionally exhausted by what happened. It was all such a shock. I have been so tired during the day and I haven’t had the energy to do anything. I have punished myself because I have been at home all week, yet I have done no housework, no work, nothing except be at the beck and call of my children, and it’s been exhausting!

But I have to accept that our new found situation will take some adjusting to and in a few weeks when the injury settles down my daughter will hopefully be moving around a little easier and we won’t have to worry so much about whether she knocks her arm. We might then be able to work out a pattern or some kind of routine that we can all be happy with.

In the meantime the work will just have to pile up. I didn’t make my July Camp NaNoWrMo challenge, but it doesn’t matter, I will finish it at some point. This whole experience has made me realise how fragile life can be. Sometimes I can be a little blase about my childrens’ safety. I like to give them some freedom and allow them to make their own choices and mistakes. But for the moment I am wrapping them up in cotton wool and not letting them out of my sight. I will relax again at some point, I know, but I am reminded that you truly never know what is around the corner and I am only sorry that I wasn’t there to help and protect my daughter when she needed me. But what can you do?

My eldest daughter did her first show this afternoon; the one she has been rehearsing for all week. When I dropped her at the stage door earlier I was tempted to say ‘good luck, break a leg’ but I stopped myself short. I don’t need another broken limb in my house right now. One is more than enough. 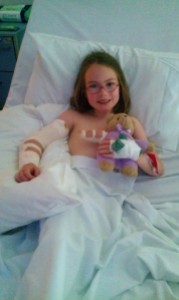