I was thinking the other day about a moment that has defined me as a parent and although there are many, one in particular stood out.

My middle daughter was a difficult baby. People told me that the second child would be easy, so I couldn’t understand how come mine was the complete opposite. Easy going she was not, relaxed she was not, instead I remember that from as young as six weeks old she was aware that she was not in my arms. I couldn’t pass her around amongst my friends as she would just cry and cry until I took her back again.

As she grew it became clear that my daughter was acutely sensitive to everything. Her only relaxed state was when we were back at home. Any other time was traumatic and stressful for her. If I took her to a play group she would cling to me and cry the whole time. The lure of interesting toys wasn’t enough to tear her from my side. I remember taking her on holiday for the first time and after arriving at the beach I took off her sandals and socks and dumped her straight on the sand thinking she would love it, only for her to shriek and jump back on to the blanket. From then on, every holiday we went on she would sit in the sun tent looking miserable whilst her older sister played in the sea and made sandcastles. It was the same with bare feet on grass and she also had a complete aversion to water, which made family trips to the swimming pool an impossibility.

As a toddler there was no natural curiosity to explore her surroundings or to take an interest in other children; in fact if another child so much as brushed passed her she would burst into tears and be inconsolable. Other adults, especially men, must have seemed like monsters to her from the way she reacted to them.

I went through every emotion as a parent. I was sympathetic towards her obvious distress and the way she found everything so difficult, whilst at the same time I felt smothered. There were times when I just couldn’t bear the constant attention that she needed from me and I found myself emotionally pushing her away. At other times I couldn’t stand to be around her and I felt as though the mother-daughter bond that we should have had was none existant. She needed something from me that I just couldn’t give her; I had an elder daughter too, who was only three years old and I was too exhausted to devote all my energy to the one child.

When I was heavily pregnant with my third child, my daughter was around 22 months of age and she had been having difficulty sleeping. Whilst sat opposite her one day at dinner my husband noticed that one of her eyes was turning in. We had never noticed this before and we suspected that it was worse at that point in time because she was so tired.

I had not known that all babies are born long sighted and that their eyesight develops as they grow, but in my daughters case that hadn’t happened. This was my defining parental moment. The moment when the realisation of everything that had happened in my daughter’s life suddenly made sense; why she only felt comfortable in her own home, her reluctance to leave my side, her clumsiness, why she was a late walker. SHE COULDN’T SEE.

My daughter had spent her first two years feeling her way in the world, unsure of anything because her surroundings were nothing but a blur, and all that time I had spent resenting the fact that she wouldn’t get on and do things like every other child her age did and like her older sister had done before her. I’d tried to force her into doing things, thinking that it would help her find the confidence. I didn’t want her clinging to me all the time because I thought it wasn’t healthy for either of us. I didn’t understand her needs, I couldn’t help her and our relationship was fraught.

Can you try to imagine how terrible I felt when I found out what was the cause of all this angst? I felt stupid and selfish and that I had let her down. I didn’t know at the time if I could ever forgive myself for being such a terrible mother and I thought that I would never be able to have a proper relationship with her. At the time I wrote a poem about my daughter. I don’t claim to be a poet, by any stretch of the imagination, but back then it summed up her situation and how I felt about it. I cried when I wrote it and it still brings tears to my eyes when I read it now. Here it is:

Scarlett was always tripping over toys, bumping into tables or walking into doors,
Her knees were always bruised and scraped from falling on the floor.
Scarlett didn’t like to run,
She always stayed close to mum.

Scarlett was clumsy, frightened and she didn’t know what to do,
It’s hard to tell a grown up what’s wrong when you’re only two.
Scarlett didn’t like to run,
She always stayed close to mum.

The doctor looked at Scarlett; he checked her eyes and knew,
‘Your eyes need some help to see,’ he said ‘I know just what to do.’
Scarlett didn’t like to run,
She always stayed close to mum.

Scarlett likes to dance and skip and play with all her friends,
Now she’s got her glasses on the fun just never ends.
Scarlett loves to run,
She doesn’t mind being away from mum.

My daughter is six now. She is beautiful on the inside and out. People call her an old soul. It took her a long time to adjust to her new found world when she first started wearing her glasses. At the time, the health visitors told me that she had missed out on gaining a lot of her early social skills, as most babies do this through observation. So right up until she went to school she played on her own and found large group situations, like playing in the garden at preschool, a little difficult; she would often stay indoors where she felt more secure. Over time her early sensitivities have lessened and although she still has moments where she struggles emotionally, for the most part she is no different from her peers.

What has stayed with her, though, is an immense amount of empathy. My daughter is a mother hen figure and she is very in tune with the feelings of those around her. I believe there isn’t a bad bone in her body and she is one of those individuals who sees the good in everybody. I still worry, of course, I always will. I worry that because she is like this, she will be walked all over and possibly even bullied. Will others take advantage of her kindness, take her forgranted? Will she even realise?

I am so grateful that I do finally have a relationship with my daughter. We now understand each other and I have developed the ability over the years to sense, instinctively, if a situation is about to arise that might cause a problem for her. In doing so I am able to forewarn her or prepare her in whatever way is necessary. I have learned from experience that if a situation is properly explained before hand; this is what is happening, this is what we are going to do, this is how it will end, then generally we don’t have any problems.

The strength of our relationship continues to grow and develop and I am beginning to put the guilt of my earlier failings behind me. This is the first time I have ever put pen to paper to express this and I’m hoping that in years to come I will read it and wonder what I was making all the fuss about. 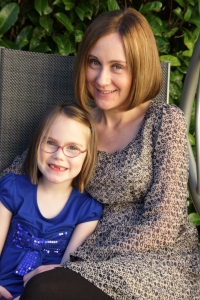